Konstantin Buteyko was born in 1923 in Ukraine, in a town about 150 km from the capital Kiev. At the age of 23 he started studying medicine in Moscow. During his studies, one of the assignments was to observe and record the breathing of terminally ill patients. After hundreds of hours of observation, he was able to accurately predict the time of death of the patient, often to the minute. He had discovered that each patient’s breathing increased as their condition deteriorated and they approached death.

In his student days, Buteyko himself was diagnosed with a malignant form of hypertension (high blood pressure). At one point, his life expectancy was just 12 months. He did extensive research into his illness, but it looked like there was little he could do about it.

Day of his discovery

On October 7, 1952, he completed a major in clinical therapy. In hindsight, it turned out to be a memorable day. He had long wondered if his high blood pressure, which was deteriorating, could be a result of his deep breathing. He did a little experiment to test this idea. He deliberately began to breathe less deeply and soon noticed that his headache and the pain in his right kidney and his heart disappeared. He then breathed deep five times and felt the pain come back. He started breathing less deeply again and the pain subsided. He concluded that breathing can not only reduce or eliminate symptoms but can also cause them.

Buteyko started looking for the theoretical underpinnings of his discovery. The data available in 1952 from scientists such as Henderson and Bohr seemed to confirm his hypothesis. Even then, it was known that excessive exhalation of carbon dioxide leads to spasms, which reduce the supply of oxygen to vital organs, including the brain. As a result, one continues breathing even heavier which completes the vicious circle.

He then devised a program to measure breathing, and found a method to restore patients’ breathing to a normal, healthy volume. The method involves switching from mouth breathing to nasal breathing, exercises in relaxing the diaphragm and creating a feeling of air hunger, and making small lifestyle changes to support the recovery process. 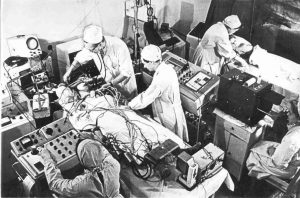 At the time, the medical establishment was very skeptical of Buteyko. In order to accept his theory and method, he began a clinical trial in 1959 including 200 people, some of whom were ill and some healthy. In January 1960 he presented his research findings for the institute’s scientific forum: there is a correlation between depth of breathing, carbon dioxide levels in the body and having (no) health issues.

For many of his colleagues, Buteyko’s conclusions were at odds with mainstream theories on which medicine was based. Surely it could not be that disease – for which surgery or extensive medication was the usual remedy – could be treated with changing breathing? Still, this was exactly what Buteyko showed. And though it was not fully accepted, Buteyko received the temporary support of the Forum’s president, Professor Meshalkin, to carry on his research.

Buteyko carried on, assisted by a team of two hundred qualified medical personnel and using the most up-to-date technology.

In 1967, more than 1,000 patients with asthma and other diseases were recovered using his methods. In January 1968, after growing public support, Buteyko was given another chance. The health minister promised to adopt the Buteyko method as standard medical practice if Buteyko demonstrated an 80 per cent chance of success. This had to be based on scientific evaluation of serious cases of disease that could not be helped with regular treatment.

Forty-six patients were taught his method, and the results were astonishing: by the end of the clinical trial, all 46 patients could be officially declared cured. However, for unexplained reasons, falsified results were forwarded to the ministry, which decided to close Buteyko’s laboratory..

Nonetheless, Buteyko continued his work. He conducted clinical trials in Leningrad and at the Moscow Institute of Pediatric Diseases, with success. Finally in April 1980, the Buteyko method was officially recognized as treatment with a 100% chance of success. In 1983 his method was patented as “The treatment method of hypocapnia”.

During his long career, he trained more than 200 medical professionals in teaching the method. He has written more than fifty scientific publications on the relationship between breathing and carbon dioxide. At least five dissertations were written by his colleagues.

In 2002, Buteyko’s health deteriorated, partly due to the consequences of a serious car accident a decade earlier. By now he had retired and devoted himself to more spiritual matters. He died on May 2, 2003 and was buried in Feodosia, Crimea.

Please feel free to contact us for free consultation.