Chronic Obstructive Pulmonary Disease (COPD) is a collective term for a number of conditions, including chronic bronchitis and pulmonary emphysema. In COPD, breathing is severely disrupted and differs from what we call a healthy breathing pattern: regular breathing through the nose, with a proper use of the diaphragm. Most COPD patients breathe heavily in the upper chest and suffer a lot from shortness of breath. The Buteyko method can help them breathe easier and have more energy. 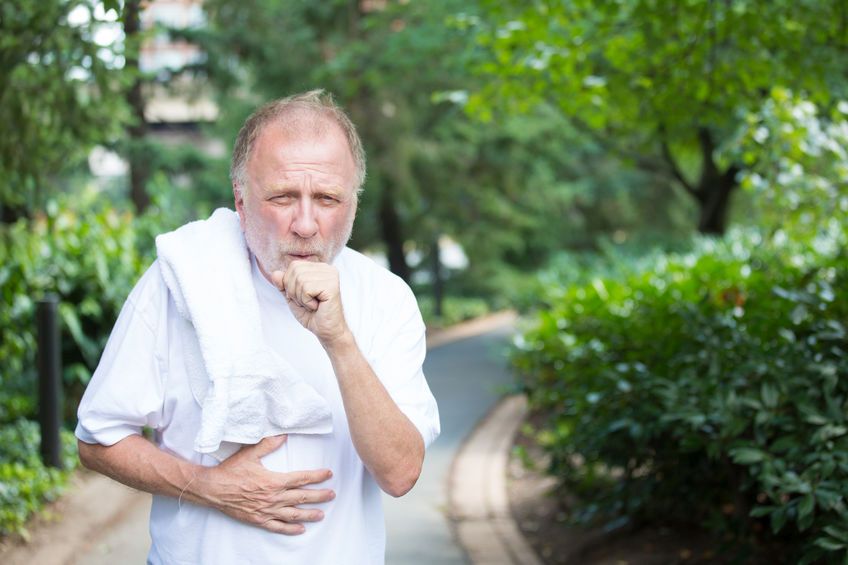 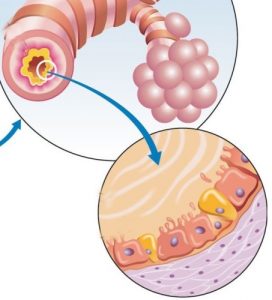 In case of bronchitis, the bronchi are inflamed. The inflamed wall of the bronchi swells and more mucus is made. Acute bronchitis often occurs after a cold or flu when a virus in the bronchi causes inflammation. Healing is usually a matter of letting it run its course. In chronic bronchitis, inflammation has become permanent. The mucous membrane in the bronchi thickens, making it harder for the air to pass through it. It also produces more mucus. This makes breathing more difficult and leads to coughing. The cilia that take care of the drainage of the mucus are often damaged, which makes coughing up mucus more difficult. 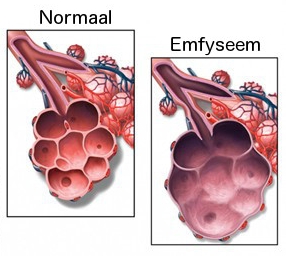 In pulmonary emphysema, the alveoli are damaged, which worsens the exchange of carbon dioxide and oxygen and reduces oxygen uptake in the lungs. Normally, the hemoglobin in the red blood cells is completely saturated with oxygen when the blood leaves the lungs. With healthy lungs and calm breathing, the saturation meter on the finger measures around 97%. But with pulmonary emphysema it can drop below 90%, especially when doing physical exercise. This makes you feel tired more fast. Pulmonary emphysema often causes a shortness of breath. Exhaling is difficult and breathing is faster. Wheezing and a lot of coughing are known symptoms.

When does Buteyko help

COPD causes irreversible damage to the lower respiratory tract and the alveoli. However, in most people (about sixty to seventy percent) with this condition, the narrowing of the airways is to some extent reversible. For them the difficult breathing is not due to damage to the lung tissue, but due to reversible  factors including a combination of inflammation, increased mucus production or a contraction of smooth muscle tissue in the respiratory tract. Medication is often prescribed for this purpose.

Effect of Buteyko on COPD

The Buteyko method basically involves switching from breathing through the mouth to nasal breathing on a permanent basis. This has several advantages. Nasal breathing triggers breathing with the diaphragm. As a result, more air enters the lower and also more bloodied parts of the lungs which improves oxygen uptake. The blood also spreads better throughout the lungs, which lowers the risk of a lung infection. Nasal breathing also improves the availability of the gas nitric oxide (NO) that is released from the nasal cavity. NO dilates the blood vessels and airways in the lungs and ensures sterilization of the inhaled air.

The Buteyko method consists of several breathing exercises that gradually reduce the regular breathing volume to a normal level. People with COPD continuously breathe a volume of air that is too large. The training program aims to turn this chronic overbreathing into a normal, functional breathing patterns. As the volume of breath decreases the breathing problems will also be reduced: the feeling of shortness of breath and symptoms such as coughing, wheezing and chest tightness diminish..

You can learn the Buteyko method in an individual course, with meetings live or online (by video calling), or with a combination of the two. At our office in Hoofddorp, the sessions will take place in compliance with all Corona measures.

How is your breathing now?

Buteyko has developed a simple test: measuring the Control Pause. This test is explained here.

Do you suffer from COPD?

Please feel free to contact us and request a free consultation. Or read more about out the content of the Buteyko course and how to sign up.